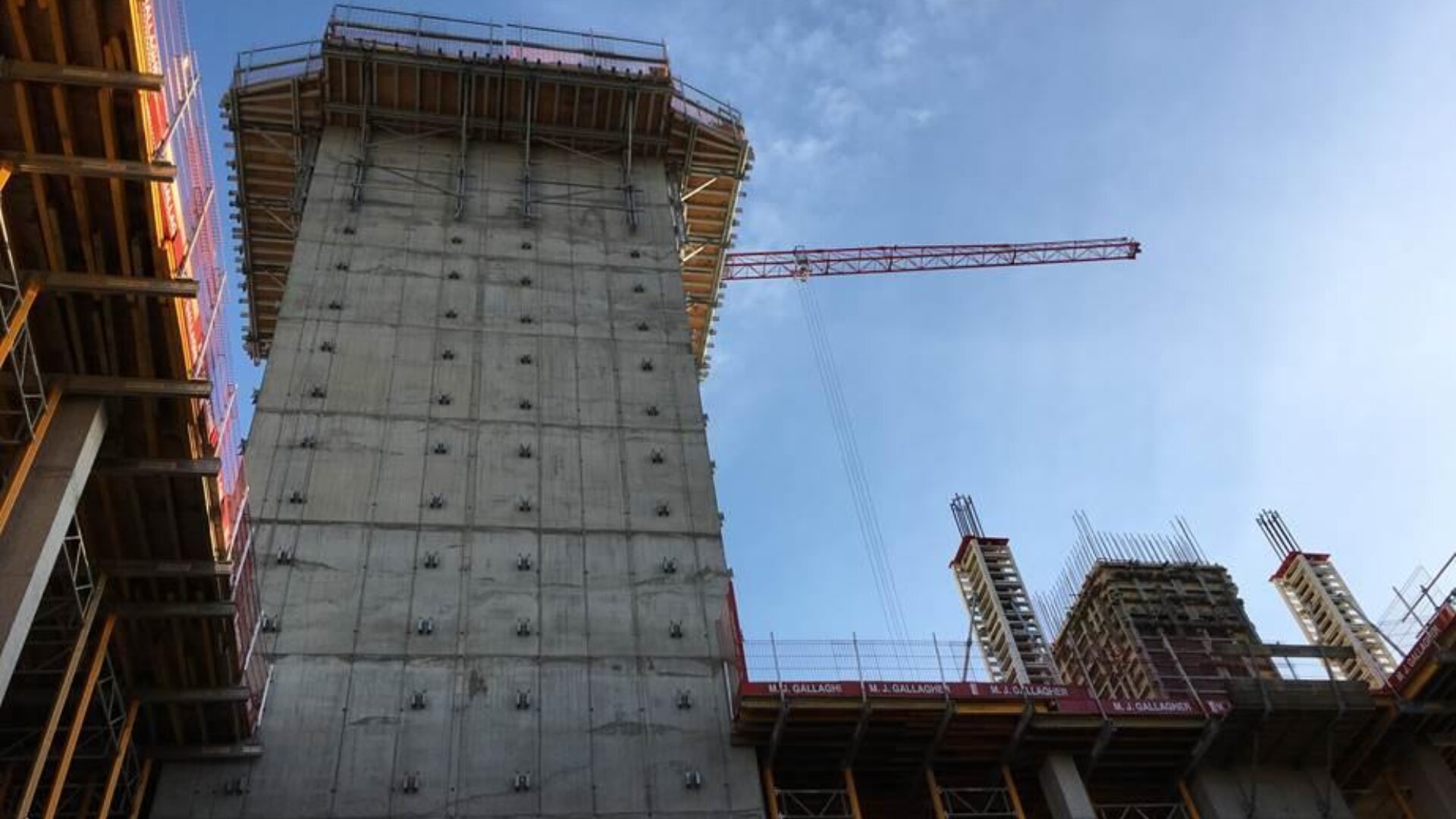 The site of a historic factory is being transformed into a state-of-the-art hospital that will serve people for generations to come.

Behind the old Victorian entrance of the former GKN factory in Cranford Street, Smethwick, hundreds of workers are building the Midland Metropolitan Hospital.
Contractor Carillion, the Wolverhampton-based construction and services group, is already one year into the three year £300 million building project.

Concrete is still being poured but the core structure is now in place.
There are two levels of car parking, with three levels on top that will be occupied by operating theatres, accident & emergency, MRI scanning rooms and other treatment services.
On the roof are five-storey lift shafts that will be the core of the five floors of wards that will sit on top.
It is a hugely complicated project stretching across an area of 12 football pitches, but it has already been completed – virtually.

A three-dimensional computerised model of the hospital, complete down to every detail, exists on the internet.
It is just one of the ways in which this is a ground-breaking project.
The hospital is the first public-private finance scheme to use BIM, or building information management, which allows planners and builders to work out all the details – and the potential problems – before construction started.
Project director David Hollywood said: “We built it in 3D before we laid a brick.
“Sandwell Council has been able to use it to encourage local suppliers and tradespeople to get involved.
“It also means the local community has been able to get involved at the planning stage.” Every aspect of the new hospital, from its layout to the position of the entrances to the car parks, the maternity unit and the accident and emergency department, has been examined by the medical staff who will run the hospital and the people who will use it.
This is clearly a special project for Carillion and its people, as Mr Hollywood explains: “It’s a great job.
“Even our senior directors have talked about the pride across Carillion in being involved in this project.
“Our construction managing director Adam Green came here for the official ground-breaking ceremony in January.
“He’s from Pattingham, just outside of Wolverhampton, so it’s local for him to. A lot of the people working here are local. Their friends and families will be using this hospital when it is finished.”
That includes Mr Hollywood himself, who was born and bred just six miles away in Ocker Hill, Tipton.
“This is close to home,” he said. “I was born at the old facility, which started out as an old Victorian workhouse.
“My family still live around Ocker Hill.
“We know how important this project is.
“People have been talking about a new hospital for decades, but we are now turning that into a reality.”
Mr Hollywood has worked for Carillion for 18 years, starting out as a 16-year-old engineer working at the Mailbox scheme in Birmingham in 1998.
And he recognises the site of the new Midland Met hospital comes with its own heritage. “This was the headquarters of GKN,” he said. “In its heyday it was producing one third of the world’s screws.
“But they moved out in around 2006 and its has been derelict.
“We’ve had some work tidying the site up but you come in to the site still through the old GKN entrance. We’ve knocked down one of the old factories to create car parking for about 300 vehicles.”
Between 350 and 400 people are currently working on the site, about a 100 of them for Carillion and the rest from its suppliers and sub-contractors.
As well as those working on the building, there are scores more in a large three-storey temporary site headquarters set up across the old canal that runs beside the new hospital.
Part of Carillion’s deal to build the hospital for Sandwell & West Birmingham Hospitals Trust involves a commitment that 60 per cent of the work goes to Midlands suppliers and sub-contractors, and local people will work on the projects.
Skills shortages are a constant problem in the construction industry and Carillion is working with Sandwell College on a project to teach around a dozen youngsters and those looking for their first job the skills needed to become dry-liners and plasterers.
They will be among the scores of trainees and apprentices who will start their careers working on the Midland Met hospital.
Meanwhile, a year after work started the site has just passed a major milestone, with the first of the glass and terracotta cladding panels that will form its exterior now in place. The car parking areas are close to completion, needing just tarmacing and lighting, and work is well under way on the atriums that will extend up through the levels of the hospital.
The entrance area of the site is currently a small construction village, with stores and a constant flow of vehicles – all carefully timed and monitored – including the lorries bringing the concrete from Oldbury, around 50 deliveries each day of around 400 cubic metres of the grey stuff.
In the new year the project is set to hit top gear, with the workforce tripling in size to nearly1,400 as electrical, plumbing and other services are installed and work starts on the complex of wards that will sit atop the hospital.
The Carillion team has just under two years to meet its deadline of the hospital opening to patients in October 2018. It is a target the company aims to hit.

If you want to see the original article, please use this link: